ShopWare is your IA, IL, IN, KY, WI Cimco Authorized Reseller. We offer sales, support and training of Cimco Software and hardware solutions to connect and streamline your CNC operation. Ties in seamlessly with Mastercam.

CIMCO Edit is the NC Editor of choice for CNC programmers. Easy to use and includes powerful features such as file compare, NC-Assistant, g-code backplot, DNC capabilities and more to improve the productivity of programmers.

CIMCO DNC-Max works with your existing CNC machines and provides a full-featured solution for managing and transferring CNC programs. Supports drip feeding, downloading, and uploading via RS-232, Ethernet and wireless Ethernet – and supports program transfers to be initiated directly from the CNC control. 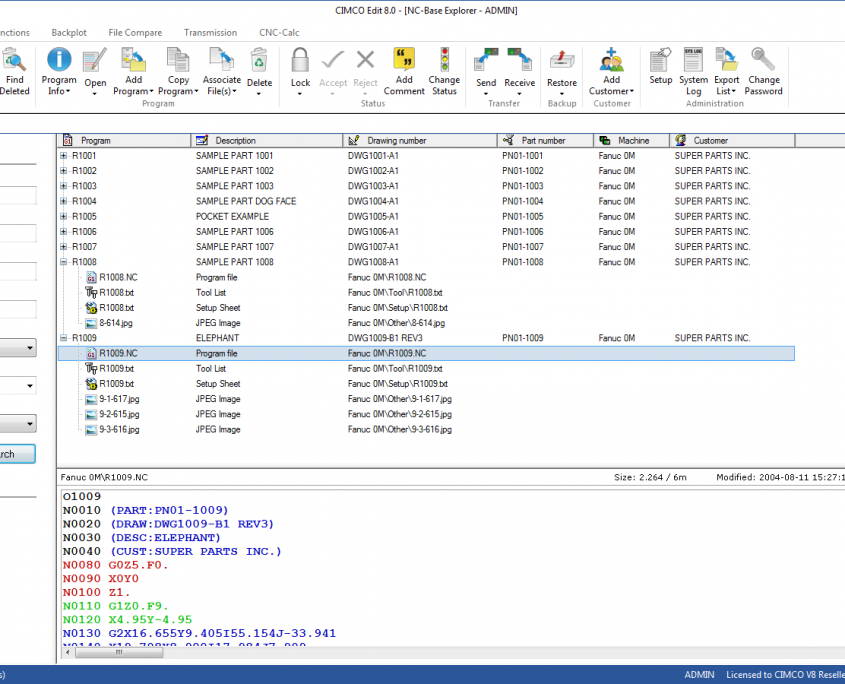 The professional choice for CNC Program Management. The perfect compliment to DNC-Max.

NC-Base is a CNC program management tool that allows you to organize and manage your CNC programs and related production documents.

Management of part programs and associated production documents is often a time consuming task for CNC programmers and operators. CIMCO NC-Base takes care of that job and goes one step further. By providing an integrated and highly flexible management, search and editing environment, programmers and operators are guaranteed to work more effectively.

MDC-Max can benefit the one man operation with a few machines and the corporate enterprise with multiple factories. The MDC-Max software is highly flexible and easily customized to fit your current and future data collection needs. Since MDC-Max is a networked solution that stores data on a central server you can monitor production from multiple locations and access the data from anywhere.

Probing can improve your machining process in many ways.However, it is often underutilized due to the challenges of having to use external software, editing NC programs or manually adding probing cycles through your CNC controller.

CIMCO Probing is a fully integrated add-on for Mastercam that addresses all of these issues by making probing an integrated part of the Mastercam programming process. CIMCO Probing helps improve the quality of parts, increases productivity and reduces setup-time and eliminates manual processes. Easily program your machining spindle-mounted touch probe directly in Mastercam the same way you program toolpaths. CIMCO Probing generates machine-independent g-code that is inserted directly into the NC program and can be customized to work with any kind of probe.

Manage all of your manufacturing related documents. Integrates directly with Mastercam.

Manufacturing companies often need to manage large amounts of documents such as CAD/CAM files, NC programs, setup sheets, tool lists, and QA documents. Not having all of these documents securely stored, organized, and made accessible this can lead to wasted time, decreased production, and costly mistakes.

CIMCO MDM can integrate with all of your existing software applications and machines. It provides a central hub for managing and controlling all of your manufacturing related data, for accessing your applications, and helps ensure that authorized employees and machines get access to the right information efficiently.

Still walking programs out to the shop floor or using a 20 year old switch box? We can help.

Cimco DNC-Max is Scaleable from 1 to 4000 CNC Machines

In this example you can have a PC on the shop-floor with a multi-port serial card and communicate to CNCs directly. This is a good cost-effective setup for smaller shops.

Medium to large shops can utilize many different options getting all their CNCs connected to the network and easily getting NC Programs back and forth. 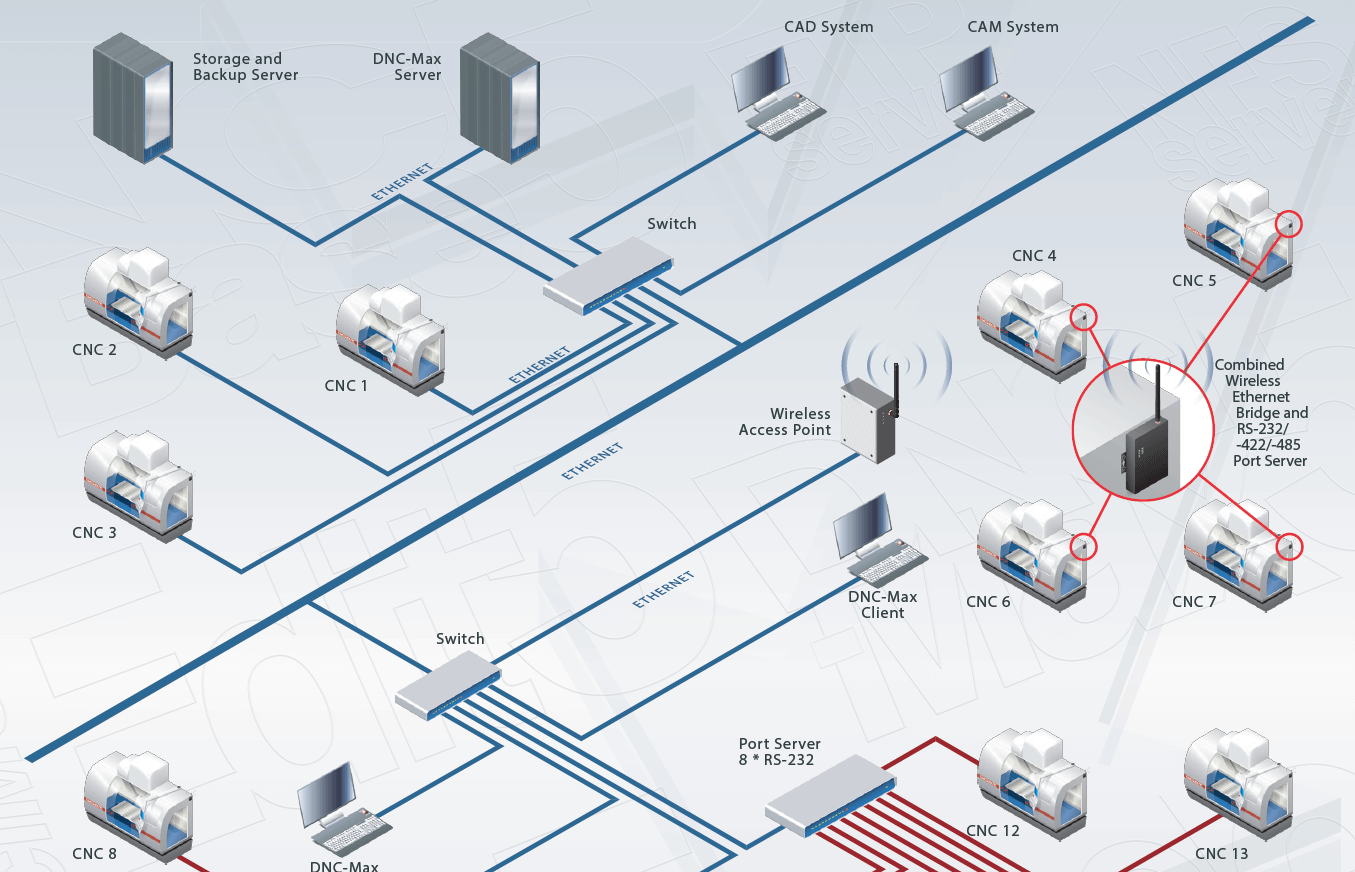 We’re happy to come and asses your shop and find out what solutions fit your needs.

How can Cimco Manufacturing Data Collection (MDC) help your shop?

Getting real time data about your shop floor gets you real time decisions and results.

Why Invest in MDC?

A large aerospace contractor was concerned that their production was not keeping up with demand and had made the decision to buy several additional machines. It was suggested that they check the runtime clocks on the machines for a week to see how much production time was being achieved. They were astonished to find that their machine utilization was below 50% but could not get an accurate picture of why this was happening.

CIMCO MDC-Max was installed to monitor the machines along with bar code readers for the operators to swipe downtime codes. MDC highlighted several problems in production, two of which were poor maintenance response and failure to replace tooling quickly enough to get the machine back in production.

Following the MDC-Max installation the customer implemented several measures including a priority system for maintenance and availability of new pre-set tools. They now achieve overall machine utilization of over 68% and meet their production targets which has increased profitability so they can now invest in a new plant.

CIMCO MDC-Max was recently installed at a customer site that had consumable tooling cost issues.

CIMCO MDC-Max was installed and collecting data before the night shift arrived. The next morning the production director checked the monitoring data collected from the machines and immediately had his answer. The night shift cycle times for 4 machines were 30% less than the cycle times during the day and the same machines were stopped for over an hour at the end of the shift. The operators had turned up the feed rates, but the increased feed rates resulted in poor tool tip life and increased tooling costs. The customer now has reduced tooling costs while still achieving the same production schedules and said that the system will pay for itself in a matter of months.

Want to learn more? Machine Data Collection and monitoring can seem like a daunting task. Head on over to Cimco.com if you’d like to dive deeper into software screenshots including data collection, reporting, monitoring and more. (Button opens in a new window)

When ready we invite you to contact us for an assessment.

Learn more about MDC
Contact Us to Learn More

We’re happy to come and asses your shop and see if MDC is a fit for you. 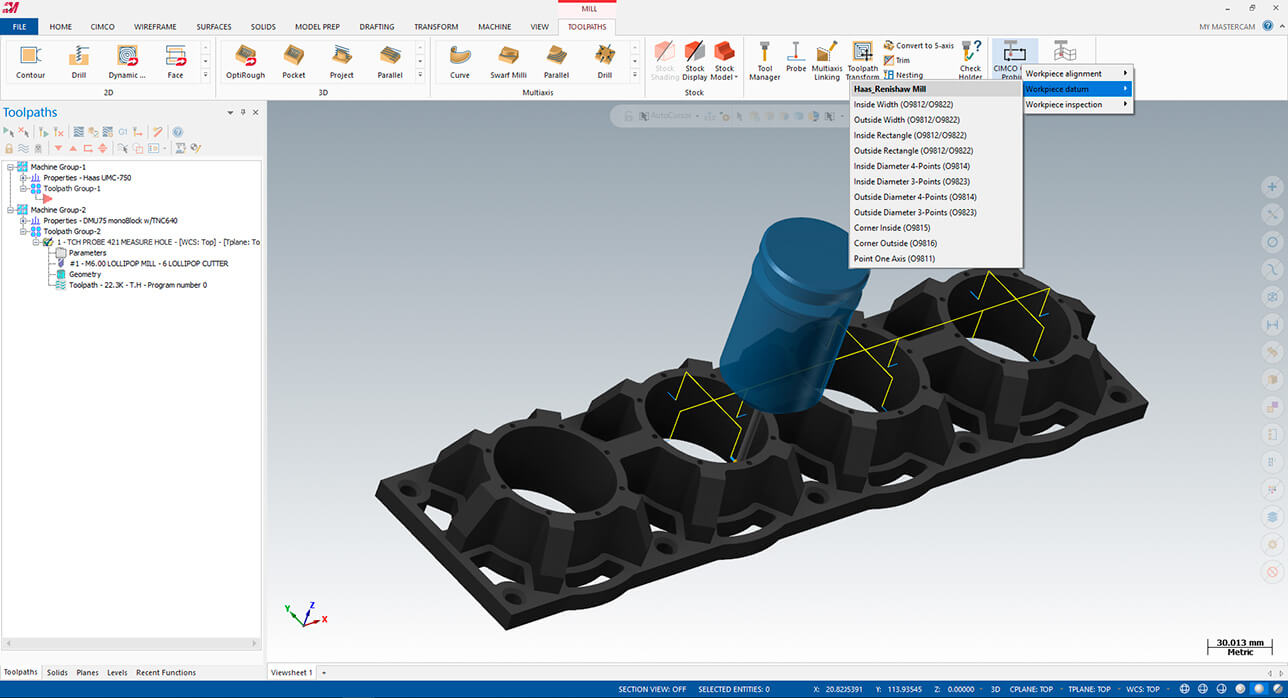 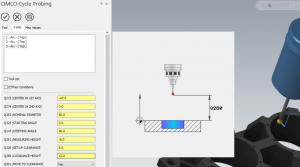 CIMCO Probing includes a wide range of Probe Cycles to handle most measurement needs. Cycles can be customized through user-defined parameters with assisting drawings that make it easy to see what each parameter controls in the cycle. For convinience, CIMCO Probing can intelligently fill in parameter values based on stock model geometry. 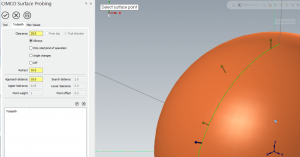 Surface Probing makes it easy to select surface points and surface normals on curved geometry. For any point chosen on the model, a measuring cycle is generated and the result of the measurements is compared with the 3d model.

CIMCO Probing works seamlessly inside Mastercam and includes its own dedicated tab in the Ribbon bar with icons for adding Cycle or Surface Probing. Probing options are shown in the Manager Panel and once a cycle is added, it is stored in Mastercam’s Toolpath Manager where it can be repeatedly adjusted as needed.

All probe tool movements can be fully visualized and verified using Mastercam’s Backplot, Verify and Machine Simulation. In addition to being convenient, this also provides confidence that your probe tool remains undamaged during machining. Probe tool collisions can be detected and resolved before the program is machined.

We’re happy to discuss your probing applications and if Cimco Probing is a good fit for your shop.

Document and File Management is Critical to a Modern Shop’s Success.

Getting programs quickly and easily to machines via DNC-Max is nice but adding additional layers of document and revision control takes your shop to the next level.

Manages all of your NC programs and related data.

MDM manages not only NC programs, but all of your manufacturing data.

CIMCO supplies solutions to customers worldwide. Please contact us for customers that may closely match your application or business goals.

Shopware takes pride in the value that our support team provides. Our team of applications engineers are here to make sure you’re making the most of your investment in Cimco. DNC and machine monitoring relies on 100% uptime. We have the people to make sure your software is always running smoothly, up to date with the latest improvements, and drive for complete customer satisfaction.

Software is nothing without a support team behind you.

Made it this far? We should probably talk.
Scroll to top